I got one of these motorised beauties. A Messerschmitt KR200 microcar, a two-stroke motorcycle-based "car", made in 1957. Actually, this is my beauty: 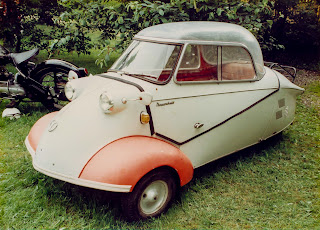 Here is the introduction to the Messerschmitt KR200 on Wikipedia:


The Messerschmitt KR200, or Kabinenroller (Cabin Scooter), was a three-wheeled bubble car designed by the aircraft engineer Fritz Fend and produced in the factory of the German aircraft manufacturer Messerschmitt from 1955 to 1964. Messerschmitt, temporarily not allowed to manufacture aircraft, had turned its resources to producing other commodities. In 1952, Fend approached Messerschmitt with the idea of manufacturing small motor vehicles. These were based on his Fend Flitzer invalid carriage.

I hope at some stage to find time and energy to restore it to pristine condition. And to be politically incorrect, I actually would like to redo it in yellow, maybe with black "wings". By politically incorrect I am referring to the fact that restoring a classic vehicle should render it "like new", exactly like when it rolled out of the factory, including original colours.

But I like the thought of driving around town in a yellow and black wasp. We'll see.

Posted by Erlend Johannessen at 23:30 2 comments: